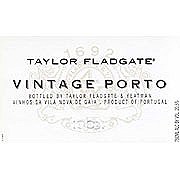 The 2011 Taylor’s Vintage 2011 has a multifaceted, Pandora’s Box of a nose that is mercurial in the glass: cassis at first before blackberry and raspberry politely ask it to move aside, followed by wilted rose petals and Dorset plum. Returning after one 45 minutes that nose has shut up shop. The palate is sweet and sensual on the entry, plush and opulent, with copious black cherries, boysenberry and cassis fruit, curiously more reminiscent of Fonseca! It just glides across the palate with a mouth-coating, glycerine-tinged finish that has a wonderful lightness of touch, demonstrating how Vintage Port is so much more accessible in its youth nowadays. But don’t let that fool you into dismissing the seriousness or magnitude of this outstanding Taylor’s.

Winery Notes:
The winter preceding the 2011 harvest was wetter and colder than the 30-year average. Budburst occurred as usual mid March and warm weather and rainfall in April produced vigorous growth. At the beginning of May dry conditions set in and there was little rainfall in eastern areas of the Douro until late August. However the vines were able to draw from the plentiful ground water reserves built up during the previous winter and bunches developed and ripened in ideal conditions. Véraison occurred a little earlier than usual on 15th June. Mild weather in June and July was broken only by a heat wave in the second half of June. August was hot and dry, with perfectly timed rainfall on 21st August and 1st September rounding off an excellent ripening season and producing a well balanced crop.

Quinta de Vargellas, in the Douro Superior, was the first Taylor property to start harvesting on 10th September. Here as elsewhere the crop showed high sugar levels balanced by excellent acidity. In the Pinhão Valley, harvesting started at Quinta do Junco and the upper part of Quinta de Terra Feita on 14th September and in the lower part of Terra Feita the following day. Fermentations were long, allowing balanced and complete extraction, and musts displayed intense colour and powerful fruit character from the outset.